Aim. To investigate the phylogenetic relations of P. melonis strain 502 and to study the varietal sensitivity of cu- cumber plants to P. melonis strain 502. Methods. DNA was extracted using the enzymatic lysis buffer. The PCR was conducted following White et al. protocol (1990). The obtained PCR-products were determined by sequencing on the automatic capillary sequencer Applied Biosystems ABI Prism 3130. The sequence of the gene 5.8S rRNA of P. melonis strain 502 was compared to the sequences from the GenBank database using the BLAST analysis. The phy- logenetic analysis was conducted by the neighbor-joining method. The evolutionary distances were estimated by the method of Jukes & Cantor. The evolutionary analysis was conducted in MEGA7. The sensitivity of cucumber plants was determined during a vegetative experiment with artificial infection background (AIB), created by introducing the infectious material of fungus P. melonis strain 502 into the soil. The infectious material was introduced at a rate of 50 thousand CFU/per 1 g of soil. The damage to the root system was assessed after 14 days of cultivating plants on the AIB. The disease severity index (DSI) was estimated to determine the general sensitivity of the investigated varieties. The varieties, which received DSI <2.0, were considered highly resistant, from 2.0 to 2.9 – moderately resistant, from 3.0 to 3.9 – susceptible, and 4.0 or higher – very susceptible. The statistical methods and Statistica 12 (Stat-Soft Inc., USA) were used to assess the reliability of the experimental data. The arithmetic mean and the square deviation (SD) were calculated to assess the DSI at p < 0.05. Results. The PCR method was used to obtain a sequence of P. melonis strain 502 of 317 bp and to conduct the phylogenetic analysis. The search of BLASTn in GenBank showed that the sequence of ITS P. melonis strain 502 had 99 % homology to 10 isolates of P. melonis. California isolate CA-1103 differed from P. melonis strain 502 only by one pair of nucleotides. The homology percentage was also 99 % to the iso- lates from Texas (TX-1060 and TX-1065), Japan (CBS 489.96 and АССС:39138), and Italy (Plect 211 and Plect 212). Spanish isolates (А-943, А-537, А-99) had a smaller percentage of homology ‒ 98 %. The distribution of the disease for varieties Zhuravlionok, Konkurent, and Rodnichok was 50 %, and for varieties Nizhynsky 12 and Liosha – 60 and 80 %, respectively. The study on the varietal sensitivity to P. melonis strain 502 demonstrated that varieties Konkurent (DSI ‒ 1.3 ± 0.0) and Rodnichok (DSI ‒ 1.5 ± 0.1) were referred to the group of highly resistant ones, Zhuravlionok (DSI ‒ 2.6 ± 0.3), Liosha (DSI ‒ 2.2 ± 0.2) and Nizhynskyi 12 (DSI ‒ 2.5 ± 0.2) – moderately resistant. The root collar was most severely diseased; it was of brown color. There were no above-ground symptoms. Additional roots above the damaged area were observed in cucumber plants of Zhuravlionok, Konkurent, and Rodnichok. Conclusions. The phylogenetic analysis demonstrated that P. melonis strain 502 had 99 % homology with 10 isolates of P. melonis from the USA, Japan, and Italy. The percentage of homology with Spanish isolates, first isolated as the representatives of this genus, was lower (98 %). The root collar was damaged the most, which also indicated the similarity of symptoms to the American isolates compared to the ones from Spain, where the hypocotyl was damaged. There were no above- ground disease symptoms. The distribution of the disease and the degree of the damage were different depending on the variety. They did not depend on the maturity group, which demonstrated individual varietal sensitivity and the relevance of selecting resistant varieties as one of the main ways to control this disease agent. The study of the varietal sensitivity of C. sativus to P. melonis strain 502 showed that varieties Konkurent and Rodnichok could be referred to the highly resistant group, while Zhuravlionok, Liosha, and Nizhynskyi 12 – to moderately resistant ones. The distri- bution of the disease was also different depending on the variety (Zhuravlionok, Konkurent, and Rodnichok – 50 %, Nizhynsky 12 and Liosha – 60 and 80 %, respectively). Additional roots above the damaged area were observed in cucumber plants of varieties Zhuravlionok, Konkurent, and Rodnichok as a defensive response to being infected by the pathogen. No response of oversensitivity was registered in the investigated varieties of cucumber plants regard- ing P. melonis strain 502, which was conditioned by the stability of the environmental factors and absence of abiotic stressors for the plant, including moisture shortage and high temperatures. 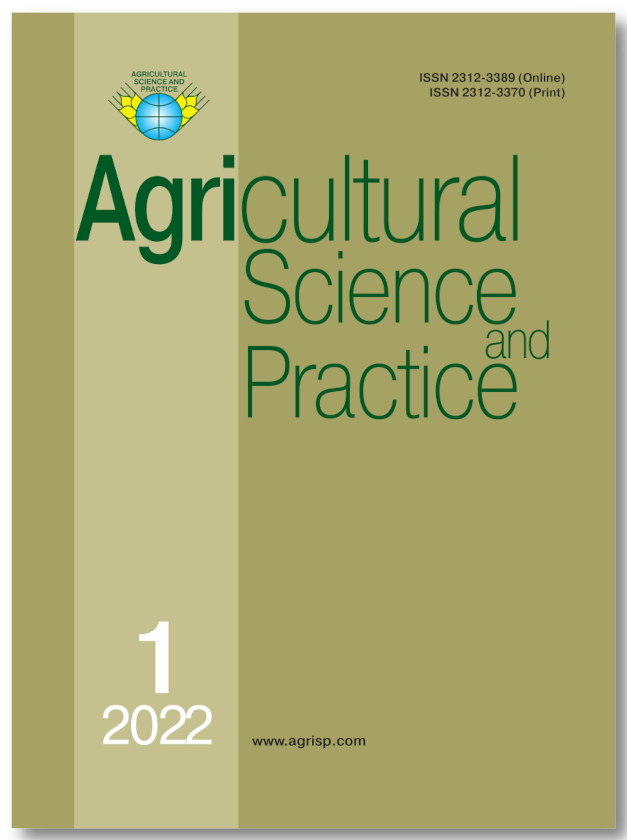